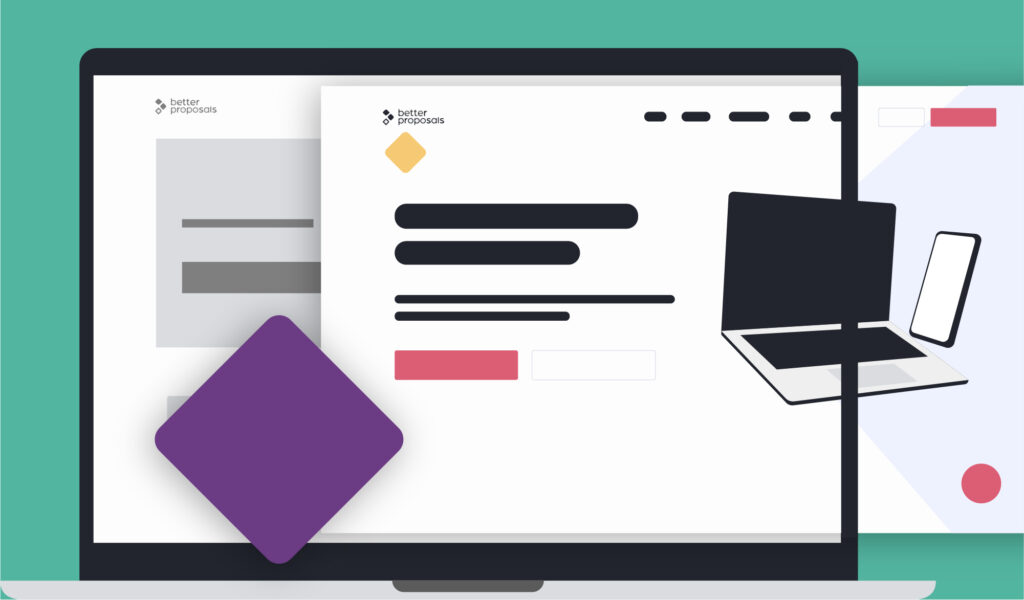 For a while now we’ve felt like the Better Proposals website and system could do with a little love. A spruce up here and there, tidying things up, removing old stuff – a spring clean as such.

This, interestingly came from when someone sent through a message saying “Do you guys work with big companies because it doesn’t look like you do?” – HUH?! That’s crazy, we have companies like Sharp, Bristol University, Oloves, AppSumo, The Great British Entrepreneur Awards and tons of other household names.

Oh… none of them are on the website. She has a point.

So we got to work a few weeks ago. We removed the dark headers, mix of fonts and made everything light and colourful. We brought our brand into the fold a little more which made it far more interesting to look at and more importantly – read.

In the process of doing this, we realised how out of date some of the copy is so we will be re-writing this in the coming weeks. It’s a delicate process and while it’s nice to launch everything new in one go, it doesn’t enable you to work out which thing has helped or tanked your conversion rate.

Now early signs point to a decent uplift in conversion from the graphical redesign, but what if our copy was miles off and we’d launched it all together? We’d have no idea which thing was wrong so doing it in stages is the way to go.

Once that was done we started tackling the product itself, we quickly realised this was a much bigger job than we thought. Not only were there so many little things we’d never gotten around to fixing in the past that we now needed to do but the way things worked, especially some of the older parts, isn’t how we’d have it work now.

We made a ‘No list’. This was a list of things we weren’t going to change. This created some boundaries around some of the suggestions that we kicked about and helped keep our focus. That said, we did make a bunch of changes – some small, some large.

What did we change?

The menu in the top right was getting cluttered. Previously you had Settings and New Proposal. We then added a Help icon (even though there’s a tab on the left) and recently the Learning Center / Account Progress.

We’ve taken the decision to merge some of these things into a Profile tab which can now have your pretty face on it so Better Proposals feels more like it should – yours.

Common feedback we’ve had from people who create a lot of covers (some do a new one for each client) was that the first page where you select who you want to send a proposal to was ridiculously long if you had more than 12 or so covers. We’ve addressed this by getting rid of the cover selection completely on that page and moving the selecting and editing of the cover on the next page.

When you’re scrolling down your list of proposals, despite having a little 1 line description you can use, it can be difficult to see some of the details of that proposal, like the pricing, who it was sent to, any tags it was assigned and other little bits.

Now, when you hover over the company name in your list you’ll get a little business card style popup with a bunch of details on it. This at least means you might avoid having to click in, then back each time you want to see something basic.

We’ve ditched the dark coloured sidebar system-wide in favour of white blocks. This makes everything easier to see to start with as it’s categorised. The other thing we did was moved the stages of a proposal or document – draft, outstanding, approved, lost into tabs at the top of the page. They are easier to find for new users and they’re less hidden for the people who have been around a while.

Filters for Teams and Users are on the right hand side in their own block.

We added a timeline of activity to the Dashboard so now you can see, at a glance what’s going on in your account. You’ll only see things you have permission to see of course but it’s a nice summary.

Before, we put the details of the digital signature on your timeline but it wasn’t a certificate as such. We’ve now designed it to look like a certificate which from your point of view is purely aesthetic but we’re also going to include this on the proposal and the PDF. This gives your proposal or document a lot more credibility.

This is vital because one of the things we’ve discovered over the years is if someone has signed something and they know it’s legally binding, they’re more likely to tow the line which is what you want. All digital signatures in Better Proposals are and always have been legally binding but if it doesn’t look it to the person signing it then that clout isn’t as strong as it could be.

To give it that added sense of legality and clout, we’ve added a ‘Signed with Better Proposals’ part to the signature. You can remove this if you want to at any time.

Setting up your Custom Domain

Instead of having a massive list of instructions with conditional elements to it, we’ve simplified it by asking a single question and you simply press: Yes, No, Don’t Know and it’ll give you the relevant next steps. Much simpler and a great example of taking a step back and looking at something objectively.

How did we do this so quickly?

The way we did this was to split up the new parts and give them to our senior developer Nic, while Sabrina and I worked together to blitz everything that we knew intuitively. That removed days of back and forth. We then had Zakk in design work on new icons and layouts to add that extra bit of polish.

What’s to come in the future?

You think you want to know what you’ve got for Christmas, but deep down you love a surprise so that’s how we’re going to keep it. This gives us a platform to work faster. A fresh coat of paint in places might just be that but no-one does their best work in a dingy room do they?